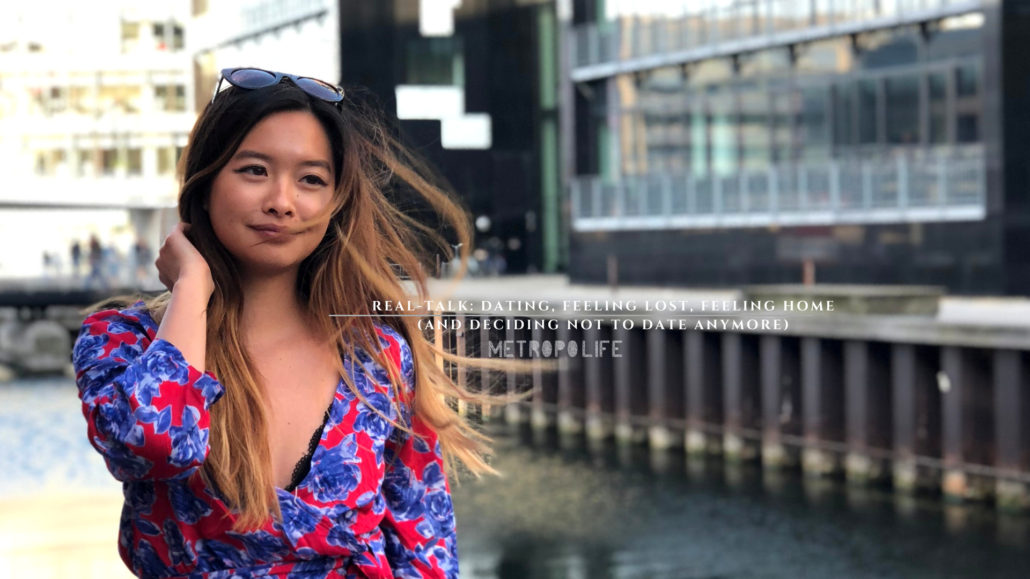 This started as an Instagram caption but I received many personal and unexpected responses. That why I want to write it down, so it’s not just a title under a picture that will get lost. I always have been real on my blog but this article will be extremely personal. It took me a long time to put these thoughts into words and even longer to decide to write it out to anyone besides myself and my very close friends. To quote Kendrick Lamar: Let’s talk about love, is it anything and everything you hope for? (Yep, just quoted the Black Panther Song: All The Stars ft. SZA 😛 ).

So, I decided back in Taiwan, around 8 or 9 months ago, to stop dating and it has been quite interesting. This week, 3 of my friends asked me on different occasions why there isn’t anyone in my life. I can pinpoint the time when I stopped being interested in dates or getting to know someone on a romantic basis. I know why I decided so but it’s hard to explain and to put in words because being a “third culture kid” and feeling trapped, a bit lonely and lost is not an easy thing to describe, I feel.

Sure, I have gone through breakups, being let down or cheated on. I guess you have experienced it one way or another. The pain of being disappointed, realizing that what you believed in was bullshit and the person did not like you the way they pretended to and did not respect you, your time and feelings either. It’s painful, and it breaks you – just to make you grow. In the past years, I have ended things with guys and guys have left me, were not interested or lead me on. This is all part of life and after I went through it, I appreciate the lessons it has taught me. Of course, I was sad but it never stopped me from being open to something new, to start going on dates, after I took my time to process what happened. A few years ago, I had a healthy relationship that ended because we had different priorities in life, so we split amicable and I moved out after almost 2 years living and building a life together. There is something about it, leaving a relationship because you want to pursue what you think will make you happy and give you a sense of purpose. Ending that relationship was sad but I was able to deal with it and I did not feel that something broke or changed me – it was just how life goes.

However, around 9 months ago I met someone in Taipei that eventually made me decide to stop dating, seeing someone or just texting anyone, even until now. The thing that changed me wasn’t a remarkable incident, it wasn’t a trustful, intense and long relationship. It wasn’t even a thing; I was hanging out with this person as a friend, I guess, for a few weeks. There was nothing special about the things we did, it was just spending time together but I instantly loved the version I was, when I was with him. A long relationship, a holiday fling or situationships that went on for months did not feel nearly as comfortable as the first times I talked and spent my time with this person. And that was the point I learned that I can be a version, that feels so at ease and genuine. Kinda like the feeling of coming home. I felt that. You shouldn’t build the feeling of coming home in a person though and I got to learn why.

Because life happens, things and people don’t always are the way they seem. We didn’t stay friends. We don’t follow each other on Social Media (which is such a big deal nowadays, isn’t it sad?) and we don’t have any contact. It was such a short time with him but after it ended, I changed profoundly. I was very hurt and I also did not understand why it was so painful. And as life goes on, friends helped me through the toughest part, filled the sadness with girls nights and dinners. And theories were made, on why it hit me so hard for the short time of the situation… “It’s the effect in the beginning before the pink glasses disappear..  its because you always want what you cant have or…  he played you,.. or it’s because it ended so sudden and harsh, you just need time.”

These theories make sense, but after almost a year, I can say that what haunted me the most was, how much I liked the version of myself in relation with that person. And I wanted to hold on to it because genuinely, it was nice to have found that thing, the inner calmness, safe haven, feeling like coming home, tranquilness,.. – there are so many descriptions for it on thesaurus. Anyway, I found that side of myself, what I didn’t know I could have.

But why? I’m 25 years young, I work ambitiously and have experienced a lot, in many aspects of life and definitely more than I thought I would. After all, my parents started as illegal immigrants that came to Germany on the back of a truck around 30 years ago and worked hard many years to build a life for us in Germany. For me to have the possibility to go and do basically everything I set my mind on is simply a wonder that I am very grateful for every day.

My friends or people on Social Media tell me sometimes, how it inspires them that I incorporated so many things in my life. Vietnamese born in Germany, living in Denmark to study Chinese and moving to Asia. Studying, working, living healthy, being open on the internet and sharing thoughts and personal stories. And I like the way I am, I really do – but moving and hopping from one place to another, living abroad in a foreign country with a foreign language that sounds like wrong German, and growing up in the Western world with Asian roots and cultural influence – it all makes me feel home anywhere and misplaced everywhere at the same time.

All these factors create a kind of loneliness. It’s difficult to describe the third-culture thing to someone who doesn’t know this split feeling. I envy my friends that can go home to their parents. For me, it is difficult because my home country is Germany but, let’s be honest, I am not a traditional German. Neither am I a typical Vietnamese. Yes, home is where your heart is – my heart is with my family, so my parents and siblings. But they have their own life, moved hundreds of kilometers away from the city I lived with them last before I moved abroad. I dont go home to a home country, I dont go home to our house or my old room, I come “home” to visit my parents and their new life with my 4-year-old sister. I love them so much, but I feel lost. I also have dated, cared and been in relationships but it never made me feel less lonely because we are always on our own, in a way. Being lonely doesnt mean to be alone but it was okay because I never felt complete and “at home” anywhere, at any point.

And then I found myself feeling comfortably home with that person as soon as I met him. He had a similar background as well, grew up in Europe while being Asian. And beyond that I felt that he understood things I don’t have to explain. You know, the usual, I feel great when I am around him thing and it was just genuinely nice just sitting next to someone and have that. I shit you not, it scared me but I was happy about it.  Because hey, it existed and I can feel so at ease. I felt at ease and kinda safe, for a few weeks, well until it ended. After that incident, I put so much energy and time in understanding myself and also what people I want to surround myself with. Being with the wrong people make you feel really lonely even if you are with them. You will attract the right friends and companions if you are the right and best version of yourself. If you feel comfortable with yourself first. And of course, cutting out dating has its lonely side, but why waste time on dates, hooking up or hanging out with someone, if that’s just to deviate from your loneliness or to compensate for something. If it doesn’t make you feel like home, it’s not your person, not your friends, not your place.

So that guy who ended up changing me the most in my young adult years, he wasn’t a great person. He is flawed and handled me in a completely reckless way that caused me more pain than necessary. Also, he ruined apple pies for me, haven’t been able to eat them ever since (maybe that’s the saddest part).

I wasn’t in love with him as much as I was in love with who and how I could be. And that guy made me realize many things – all in all, I found a perspective that I never looked for. So even though I lost that “feeling home” version of myself, I am looking forward to what awaits me, if I genuinely work on myself and not try to find things to deviate from loneliness, stress, sadness, a crushed ego or such.

Everything shapes you into the person you are now 🥀

Thank you so much for reading such a personal article. Lots of love, Tuni ❤️ These are articles I wrote throughout that time:

Friendships and relationships with a due date

Danes dont really date (neither do most people now)

The Asian pressure of success

Edit: If you would love to support me to write more articles, please join me on my Patreon 🙂 patreon.com/tuni