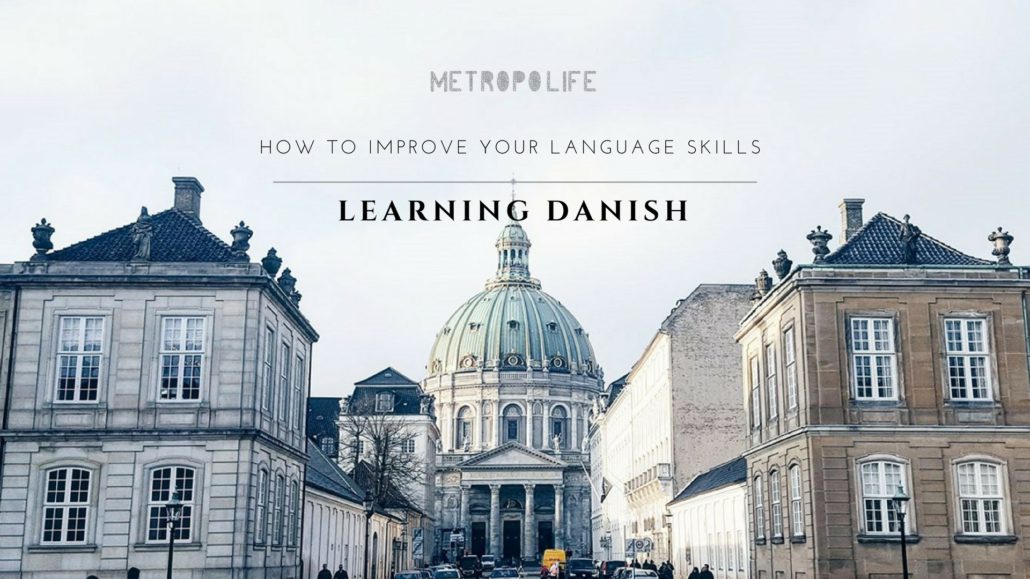 Learning a new language is difficult and at times, really, really frustrating. Especially with Danish, since -let’s be honest- it’s just a weird language to learn. You don’t pronounce the words how they are written. Or Things are written one way, but when you speak it, no one would use that word order or pronunciation. Or or or or or…

The list of things is endless. Even after 3 years, I am not close to fluent. Not in my wildest dreams! But in the past months, I have forced myself to improve my Danish, so I can at least understand my colleagues and friends. And finally, (most of the times and when I focus and listen closely) I understand what the people surrounding me are talking about 🙂

Some of my colleagues sometimes speak Danish to me and I have no problem understanding them. I sometimes translate Danish texts into German or English and for a Danish brand, I am managing their Social Media Account in Danish and interact with Danish followers – That’s a big success for me, even if the difficulty of the conversations are quite basic, but it is a start to be fluent one day 🙂

What helped me the most were sadly not the lessons I had for years in the language classes. Of course, I learned the basic grammar and vocabulary there but in my experience, the focus was more on grammar than actually speaking (in “real life” Danish and not “book” Danish, if that makes sense). So a few months ago I started to do a few things differently to get out of my comfort zone and start improving my spoken Danish. These are just some tips and of course, they would apply for any other language 🙂

First I only spoke Danish to people I didn’t know, I felt uncomfortable speaking Danish to my friends or people I knew. So I started to use my basic Danish knowledge during my visit in the supermarket, in a coffee shop or the shawarma guy around the corner. It might be only a “tak og i lige måde” but it feels like more 🙂  And slowly you will start using it more and more. I keep asking things I already know, just to use the language more (for example, I ask if I can pay with credit card.. of course I know that I can pay cashless, I live here for 3 years – but I keep asking so I get used to using Danish) 😉

Funny story: To create situations where I speak more Danish in my daily routine, I start asking the bus driver if the bus goes to the main station or Vesterport or wherever I had to go. Well since I take the same bus nearly every day, I feel like the drivers might recognize me now and think I have the memory of a goldfish 😀 But I spoke more Danish!

Pro tip: I found out that people are really nice and patient with me when I friendly tell them that I will try to order something or describe it in Danish [I usually ask: “Kan/ Må jeg prøver at sige det på dansk” and I guess it is good enough since everyone understood what I meant]. In my experiences, the cashier or waitress was listening attentive and with a smile and if I made a mistake, they pointed it out but not in a condescending way but as a helpful reminder 🙂

I go to work and university by public transportation and often, I end up sitting on the metro or bus 4 times a day. And you know what’s (for free) at every station and on every bus: Metroexpress. A few months ago I started to read while taking public transport. I don’t read the entire newspaper, but one or two articles again and again. First I skim through it and ignore the words I don’t know. Then I read it more thoroughly and pick up 1 or 2 words I don’t know but seem to be very important or common.

I try to keep them in mind and usually because I am more attentive, that word pop up during the next days. The first word I learned through this was “tegne”- to draw or to sign in another context – and then I saw it everywhere: tegnepapir, tegneskole, tegne bog, tegne kontrakt. 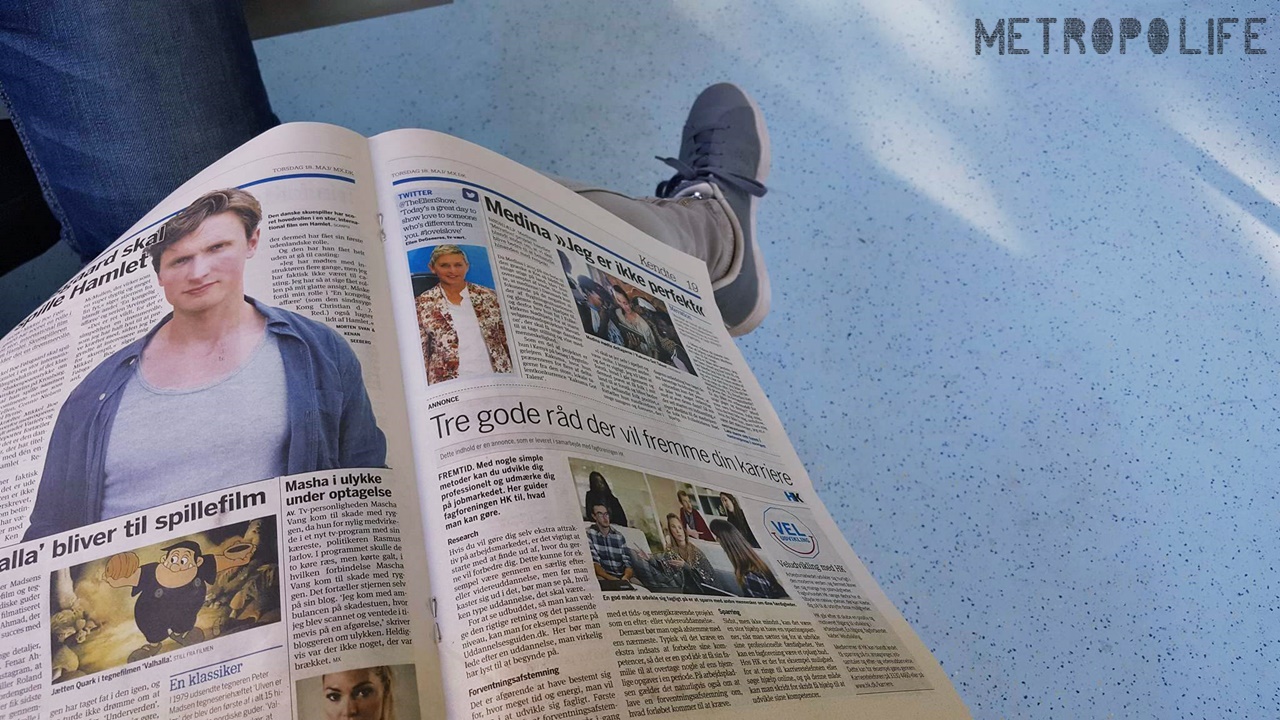 Of course, if you bike to work or university, you can’t read your daily article there. But you can download an app or make it you poop time routine to check out some Danish news instead of memes 😉

Edit 1: I got recommended to read dr.dk/ligetil after I posted this blog post. The articles are a bit “simpler” and easy to understand.

Another thing that has helped me is that I bought one of my favourite books in Danish, that I have read half a dozen times before. I know what happens in the book, I might be able to quote some parts and this is why it was quite nice to read the book in Danish 🙂
Edit 2, after I posted: Many of you have told me to add Duolingo and Memrise to the list. True, it’s a great idea to study a few minutes in between breaks or during commute and use the app to refresh vocabs!

The next step I took, was responding messages in Danish. First, it was under some of my Instagram pictures. And yes, I felt a bit weird because I know there were lots of mistakes. But if you don’t try, you won’t succeed right 🙂 After that, I try to reply some of my friends who are learning Danish as well with short texts in Danish (and some English words when I can’t remember the Danish word). My Danish is not perfect, I make some mistakes but I learned and remembered (through Social Media) the common sentences Danes use.
One of the first ones were of course “Det er dejligt” or “Hvor er det flot” “Det ser rigtig/fint godt ud” (yep..learned these under some girls Instagram pictures).And it works, now I know these sentences by heart. Of course with time, you will understand and write more.

At my work, my boss trusts me enough to let me engage and talk to our followers and that’s actually really nice 🙂 Sure, it’s still far from speaking Danish fluent but at least in some parts (such as in the Social Media part), it is not that obvious. I also have more time to think and check the sentences compared to a real life interaction of course, but I realized that building these “small communications” with Danes throughout the day has helped me learn a lot of catch phrases 🙂

It might be hard at first but it helped me a lot, especially if I have been studying for my Chinese exam or when I had a lot of work to do and it’s only in English, for a few days in a row. I watched a Danish series in the beginning but this got too tiring for me. After a long day, I simply had no energy for following the plot and reading and understanding the dialogues.

My solution was to watch random Danish YouTubers or short videos, just to hear Danish. I am also following French YouTubers and Instagrammers for the same reason. I can surround myself with the language and get used to it again.

No matter if it is a tandem partner, a Danish friend or language meetings  – if you can find the time, meet up and try to speak Danish. It might be a bit uncomfortable or even embarrassing but once you overcome that fear or “little barrier” you’ve built, it is actually quite fun. In the group “Expats in Copenhagen,” members often share language cafés and events. You should join them if you can find the time. I sadly stopped going because exams and work took over and I am preparing for my semester abroad in Asia. But once I come back, I definitely will start going again. It is really funny and the people are there to learn and to help and to socialize. The perfect conditions to improve a language (some language meet-ups are not only for Danish but for Spanish, French, Mandarin, German or English as well).

I hope these small steps that I took myself to be more confident and improve my Danish sounds reasonable to you. Maybe you will adapt some of them 🙂 Danish is my 6th language and I must say that it is by far one of the hardest (after Chinese, but that is because they have all these characters). Learning Danish and understanding it is definitely doable, with a lot of work and effort of course 🙂

What are your little secrets and daily victories in learning Danish? You can share them with me in the comments or in a pm, I am curious to know 🙂

Follow my Facebook Page for updates and articles about living in Copenhagen & Denmark, Traveling and random thoughts 🙂

Ps. I mentioned in this article that I am preparing for my semester abroad. I will be staying in Asia and the blog will have a slight shift: I will write more about my travels and less about Copenhagen. I hope you will still follow along 🙂